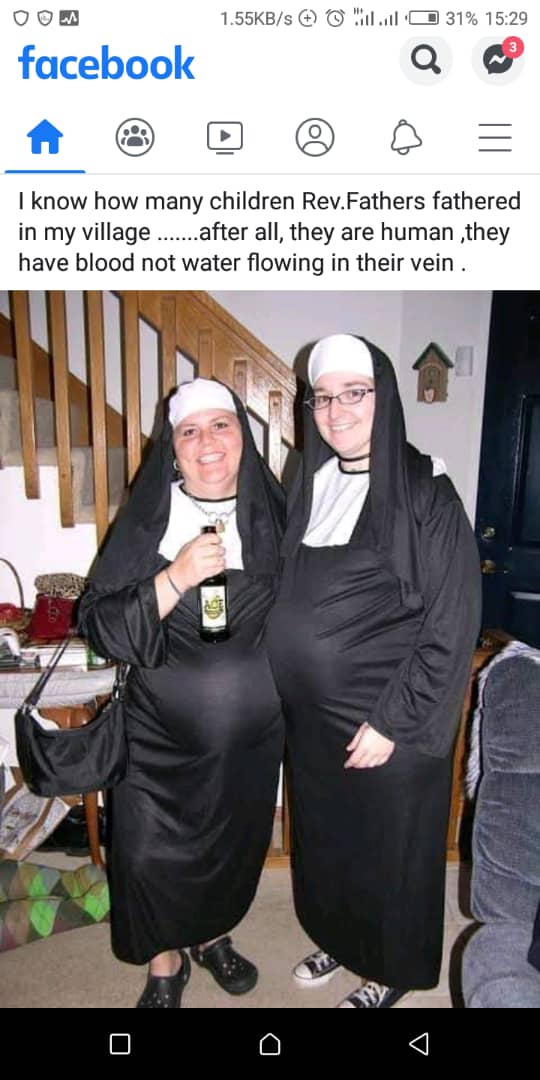 In a shocking breach of their chastity vows, two catholic nuns are indeed preggers, these nuns found out they were pregnant upon return their from an African mission. Hold the phone❗ What’s in the water in Africa? How did they suddenly fall pregnant?

It’s even funnier that the problem with this story is not the sin involved (nothing about them committing the sin of adultery/fornication… ) but the leakage of the story; which bears witness to the hypocrisy in their doctrine.

Though I’m not judging them , we still have to wonder, how many of such stories have been buried, how many of these nuns have actually left the convent as a result of sexual immorality?

According to the Independent

Two nuns are being investigated by the Catholic Church after they became pregnant during missionary trips.

The African women, who are from different orders in Sicily, reportedly got pregnant while on separate missions to their home country.

One of the nuns, a 34-year-old based at a convent in the northeastern town of Militello Rosmarino, in Messina, discovered she was pregnant after going to hospital with severe abdominal pains, the Gazzetta del Sud newspaper reports.

The second nun, a mother superior caring for the elderly in the southeastern city of Ispica, in Ragusa, has also discovered she is pregnant.

Salvatore Riotta, mayor of Militello Rosmarino, said he knew one of the nuns “well” and “regretted” the way the news had been leaked.