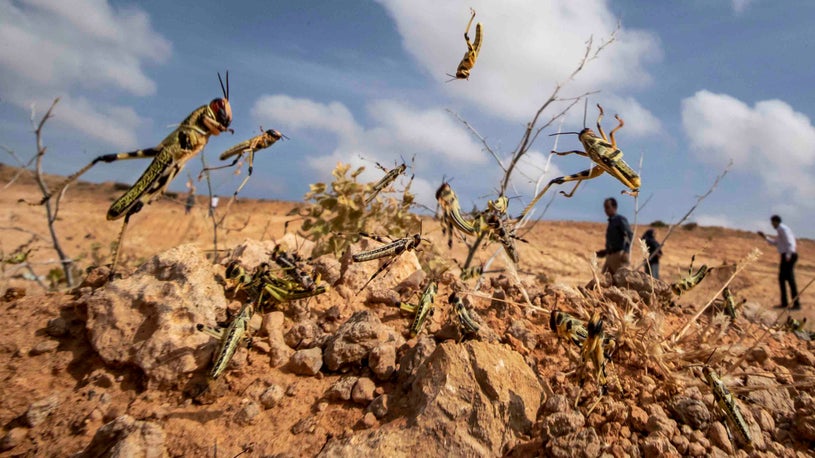 In the Book of Revelation In the final book of the New Testament, seven trumpets are sounded, one at a time, to cue apocalyptic events seen by John of Patmos in his vision. According to Revelation 8:1-2 the angels sound these trumpets after the breaking of the Seventh Seal, which secured the scroll of the apocalypse, marking the Second Coming of Christ. The fifth of these seven trumpets is said to see a swarm of locusts sent to torment anyone who does not have the approval of God.

UN Sec.-Gen. Antonio Guterres warned that “there is a link between climate change and the unprecedented locust crisis plaguing Ethiopia and East Africa. Warmer seas mean more cyclones generating the perfect breeding ground for locusts. Today the swarms are as big as major cities and it is getting worse by the day,” according to Bloomberg. In the biblical book of Exodus, locusts are one of 10 plagues imposed upon Egypt, also located in Africa, when Pharaoh refuses to let the Jewish people go. “And the Lord said to Moses, ‘Stretch out your hand over Egypt so that locusts will swarm over the land and devour everything growing in the fields, everything left by the hail.’ So Moses stretched out his staff over Egypt, and the Lord made an east wind blow across the land all that day and all that night. By morning the wind had brought the locusts; they invaded all Egypt and settled down in every area of the country in great numbers. Never before had there been such a plague of locusts, nor will there ever be again” (Exodus 13-14).

Jesus is coming back sooner than we think, let’s prepare.

The Signs and the Spirit of the End Times

One day, people will wake up to find all their money and wealth gone from the banks with no trace or records!