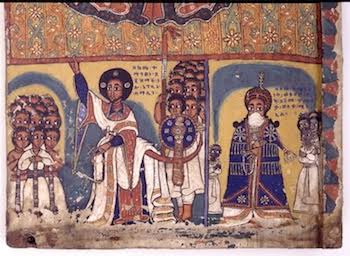 Ever wondered how Christianity came to be practiced around the African continent? Well we got you covered, here’s a little bit of history to brighten up your day.

According to the Wikipedia Christianity in Africa began in Egypt in the middle of the 1st century. By the end of the 2nd century it had reached the region around Carthage. Important Africans who influenced the early development of Christianity include Tertullian, Perpetua, Felicity, Clement of Alexandria, Origen of Alexandria, Cyprian, Athanasius and Augustine of Hippo. In the 4th century the Aksumite empire was Christianized, the Nubian kingdoms of Nobatia, Makuria and Alodia followed two centuries later.

How the Apostles, Apostolic & early church Fathers and Martyrs fulfilled “the Great Commission”…

Mark the Evangelist became the first bishop of the Orthodox Church of Alexandria in about the year 43.[7] At first the church in Alexandria was mainly Greek-speaking. By the end of the 2nd century the scriptures and liturgy had been translated into three local languages. Christianity in Sudan also spread in the early 1st century, and the Nubian churches, which were established in the sixth century within the kingdoms of Nobatia, Makuria and Alodia were linked to those of Egypt.[8]

Christianity also grew in northwestern Africa (today known as the Maghreb). The churches there were linked to the Church of Rome and provided Pope Gelasius I, Pope Miltiades and Pope Victor I, all of them Christian Berbers like Saint Augustine and his mother Saint Monica.

The early 4th century in Egypt began with renewed persecution under the Emperor Diocletian. In the Ethiopian/Eritrean Kingdom of Aksum, King Ezana declared Christianity the official religion after having been converted by Frumentius, resulting in the foundation of the Ethiopian Orthodox Tewahedo Church.

In these first few centuries, African Christian leaders such as Origen, Lactantius, Augustine, Tertullian, Marius Victorinus, Pachomius, Didymus the Blind, Ticonius, Cyprian, Athanasius and Cyril (along with rivals Valentinus, Plotinus, Arius and Donatus Magnus) influenced the Christian world outside Africa with responses to Gnosticism, Arianism, Montanism, Marcionism, Pelagianism and Manichaeism, and the idea of the University (after the Library of Alexandria), understanding …f the Trinity, Vetus Latina translations, methods of exegesis and biblical interpretation.

Psalm 34: A Song of Thanksgiving

Do you feel like you have been downgraded by life and people!?