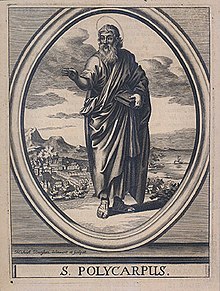 Polycarp AD 69 – 155) was a Christian bishop of Smyrna. According to the Martyrdom of Polycarp, he died a martyr, bound and burned at the stake, then stabbed when the fire failed to consume his body.

Polycarp is recorded as saying on the day of his death:

“Eighty and six years I have served Him, and He has done me no wrong.” This could indicate either that he was then eighty-sixed years old[13] or that he had lived to eighty-six years after his conversion. Polycarp goes on to say: “How then can I blaspheme my King and Savior? You threaten me with a fire that burns for a season, and after a little while is quenched, but you are ignorant of the fire of everlasting punishment that is prepared for the wicked.”

Polycarp was burned at the stake and pierced with a spear for refusing to burn incense to the Roman Emperor.

On his farewell, he said:

“I bless you, Father, for judging me worthy of this hour, so that in the company of the martyrs I may share the cup of Christ.”

Jerome writes that Polycarp was a disciple of John the Apostle and that John had ordained him as a bishop of Smyrna. Polycarp is regarded as one of three chief Apostolic Fathers, along with Clement of Rome and Ignatius of Antioch.